The Trip That Took me There

“Wherever you go there you are” 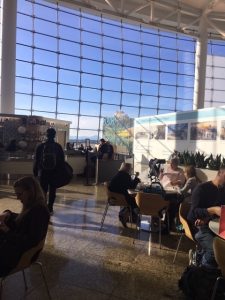 A wounded soul, lonely and blue trying to change it, but it will not be true. For the wounds won’t heal until they are healed. The truth won’t be unveiled until it is too late.
It is a long way off from the center of the city. The journey is long and rough and bumpy. It took one plane to fly almost all the way west. We landed in the field in the middle of the day. Then there was the waiting, and anticipating. For the second plane won’t get here till dusk.

Waiting at the airport means nothing much at all. It is filled with food and other shops and people in transition that are tired and rushing and rude. There I stood in the middle of the port, and waited and wondered about nothing particular at all. Time went quickly, and the day was at the end, when the other plane showed up and was ready to embark.

The plane was too small for my carry on to go on board. So they took it away and promised it would return soon. But the plane was delayed, and we sat in full view of the luggage that was waiting to be loaded before we go. We waited for clearance to go to the second field. Finally as it was getting dark, we slowly rolled off towards the second stop. Up went the little plane noisy as hell. Down went the little plane causing excruciating pain. My ears were tortured and plugged and in pain. I tried to chew some gum, but it was all in vain. The second port was so tiny and cute, I marched off the plane and right into the hood. But the car that I rented was off site and not far away, and I somehow managed to find my way. 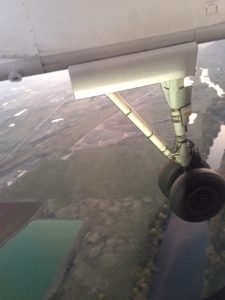 Somehow, and out of the blue I was sick as a dog. I couldn’t breath or talk or move much. My eyes were closing and begging for sleep. I couldn’t give in and had to truck down and over the hill. Actually, it was over a huge mountain. “I can do it” I chanted and I rented a car and prepared for the drive. But the drive was not short, it was not so sweet. It was long and tough and it was getting dark.

Sneezing and woozing and feeling like death. I drove up the mountain in the middle of nowhere at all. It was really hard to stay awake, and it was really tough to climb up with a small car. But when you have no choice, you keep climbing, you keep fighting you keep trying to reach your goal.

Eighty miles away was where I knew I could stop. But in the middle of the mountain my eyes threatened to close up. So I pulled over and I shut the car and got out into the cold. It was colder than I thought and it was tougher than I imagined. I ran around the car a bit cold and very withered. But I ran a few times and it felt like it woke me up. I knew that perhaps I could keep on driving without falling asleep. So even though I was terrified, I had to make it to the other side of the mountain. And I did.

You would think that the other side would be the end of my trip. But it wasn’t and it isn’t and my destination was still so much further away. But at this point I was drained completely. There was no hope at all. If I tried to tackle the last leg of the trip I would probably fall asleep and fall off the mountain. For the last part of the trip was up the mountain to the top of the tip. If I fell asleep and if I swayed for a second, the car would tumble off the mountain and nobody would ever be able to find me, or know where I am. So I chose to wait, to get some sleep in a local hotel. In the morning, I thought I would feel better and be able to get to my destination.

Feeling worse by the moment I walked into the lobby of the hotel. The clerk was courteous, but offered me a last minute price that I just could not justify. Even though I felt like death , I was not willing to spend my last penny on a hotel. So I stood there unable to move, but unable to pay. I asked the guy if there was anything better that he could do. To my shock he looked deep into the computer and clicked his finger and than just stood there and starred. But when his eyes came up to look at me, his price was so much lower than I thought it would ever be.
But it was not low enough!

I dragged myself out of the place and called my love, my daughter, the person I was traveling to see. She told me she would pay 50% of the fee. Still I forced myself to drive to three more hotels. To see if anyone can offer a better deal. In the end, and at the end of the road, when I could hardly really move, I found that the best offer I got was the first offer on my very first try. It was the very best offer that was provided for night.

My choices were two; Drive up to the tippy top now or pay it and stay. But really my choice was one because driving was dangerous. I was sick, I was tired and really my energy was too low.

So I took the hotel and the bed was so comfortable. I stayed later than usual, and finally left at noon. I was still very sick, I was hoping it would improve overnight. But even though I was sick I could easily drive with some rest and a drink.

That was when I took my last leg of the trip. I drove up the mountain and reached my final destination. My daughter and her baby were happy to see me. My granddaughter got cuter than ever. My daughter was curious and polite. That was all I could ask for at the moment.

I got to the cabin, my temporary home. I felt really good and peaceful and at home. I prepared to go to bed, and I slept like I was dead. But in the morning I was still sick and it stole two whole days of my vacation and my break.

That was how the first leg to the trip went.

Your feedback is greatly appreciated.

This site uses Akismet to reduce spam. Learn how your comment data is processed.

https://www.tippyfelzenstein.com/post/i-will-fear-no-evil This is what Jacques Attali wrote in 1981, who was then an advisor to François Mitterrand:  “The future will be about finding a way to reduce the population. We start with the old, because Read more…

A Walk in the Park

It has been a challenge to find beautiful things about “Winter in New York” but when you are determined to find them, they appear in the most unlikely places. When I originally asked that question, Read more…

My Venture Into Cyberspace

It has began… The engines are rolling, the noise is growing, the entire project is ready to rock and roll. It is exciting to take Tippy Talk into the vast wilderness of cyberspace. It feels Read more…